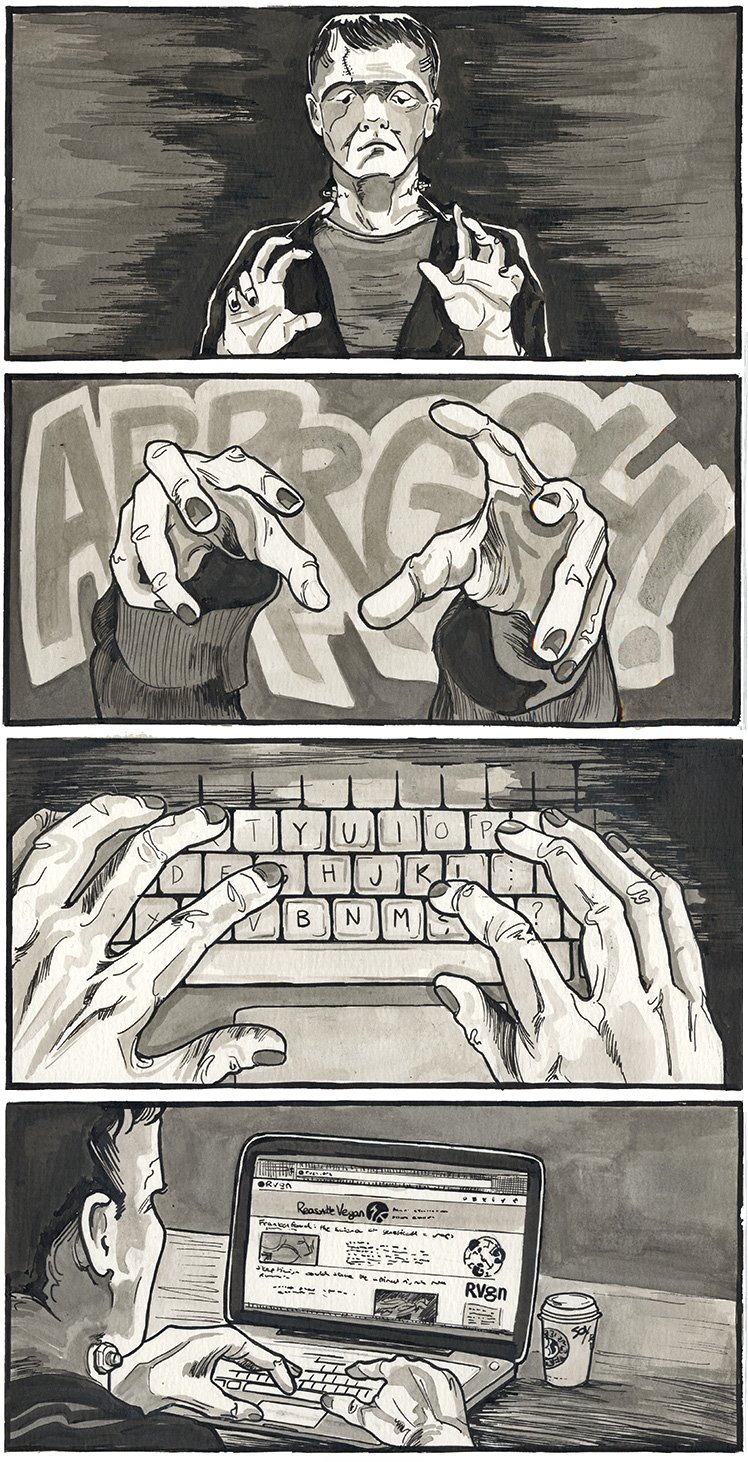 Mary Shelly’s Frankenstein is a product of its time. It beautifully illustrates the nineteenth century apprehension about the implications of advances in science. Victor Frankenstein became an archetypal ‘mad proffesor’, more concerned with pushing the limits of technology and his own genius than humanity. Readers often gloss over Victor’s eventual regret when he realises the horror of what he’s done toward the end of the story, and choose to remember him as a sociopath in a grubby white coat roaming graveyards seduced by his own hubris. Today, people use variations on the word Frankenstein to demonise the products of modern science and provoke fear in the public – here be monsters.

The tired irony of Victor’s monster being referred to by his creator’s name is perhaps not as ironic as pretentious literary people imply when reprimanding us at dinner parties. “Frankenstein is the creator, not the monster!” they admonish, smugly, but they are incorrect: Victor is Frankenstein AND the monster; his creation is the hero. The Creature seeks acceptance from humanity, only to be rebuffed because of his grotesque appearance and the anxieties that his very existence provokes. He forces those who comprehend what he is is to question their own humanity. As someone exiled from the human moral community, The Creature recognises the moral mistake humans have made in exploiting animals:

My food is not that of man; I do not destroy the lamb and the kid, to glut my appetite; acorns and berries afford me sufficient nourishment. My companion will be of the same nature as myself, and will be content with the same fare. We shall make our bed of dried leaves; the sun will shine on us as on man, and will ripen our food. The picture I present to you is peaceful and human.*

In this passage Shelly plays with the concept of man and human to illustrate the difference between the acts of man and ‘humanity’ as an ideal which exemplifies principles of justice, rationality and morality. The Creature is more humane than humans. Shelly was part of a circle of Romantic Vegetarians* inspired by enlightenment philosophy and humanism, they emphasised both the irrationality and cruelty of how humans treated animals and this message is made poignantly explicit in Frankenstein.

The Romantic Vegetarians were motivated by many of the same values as us ‘reasonable vegans’ are today. At the end of Shelly’s text The Creature is not dead, but rather left to wander alone through the bleak landscape of the sea ice covering the North Pole. I like to speculate that, despite his final speech about crawling off to die, in some fictional universe he made it back to land, found a Starbucks and right now is browsing rvgn.org.