We were impressed by the Baloney isn’t Vegan leaflets that Dave D of Pythagorean Crank produced for Vegan Chicago*. The Baloney isn’t Vegan leaflets are a distilled and veganised version of Carl Sagan’s baloney detection kit*. They explain the scientific method, present some questions that you should contemplate when confronted with a dubious claim, and a checklist of red flags to watch out for. These leaflets are available to print and hand out anywhere that vegans could be taken advantage of by charlatans. Dave took them to a vegan festival** and I have seen them as far afield as a skeptic’s conference in Los Vegas. I love the Vegan Chicago slogan printed on these leaflets:

Motivated by Compassion, Guided by Reason.

But I’m based in the UK and, unfortunately the Baloney pun doesn’t work here. We call that particular meat product bologna (apparently) and we call these sort of dubious claims bullshit (when we are being polite). Over here we still have the same problem of charlatans exploiting vegans by selling them snake oil, wacky characters endorsing unscientific ideas that make vegans look ridiculous and irrational arguments intended to promote veganism having the opposite effect – and destabilising the logic underpinning of our moral position*.

Vegan festivals often host talks by unqualified self proclaimed experts on health who offer dangerous misleading advice right next to the samples of hemp oil. Products are being sold that make extraordinary claims and carry a correspondingly incredible price tag. We wanted to create a leaflet that could forewarn attendees of these events by giving them the same list of ‘red flags’ that the Baloney leaflet does:

Like the original leaflet we wanted to provide a very brief primer on critical thinking and to give vegans who were already a bit suspicious of the dubious claims and products being sold encouragement and solidarity. With a lot of help from other UK-based reasonable vegans* we developed a leaflet that we think appeals to the British sensibility. Unfortunately despite our love of puns we couldn’t find a good one to title our leaflets, so we decided on We are Vegan for a Reason. 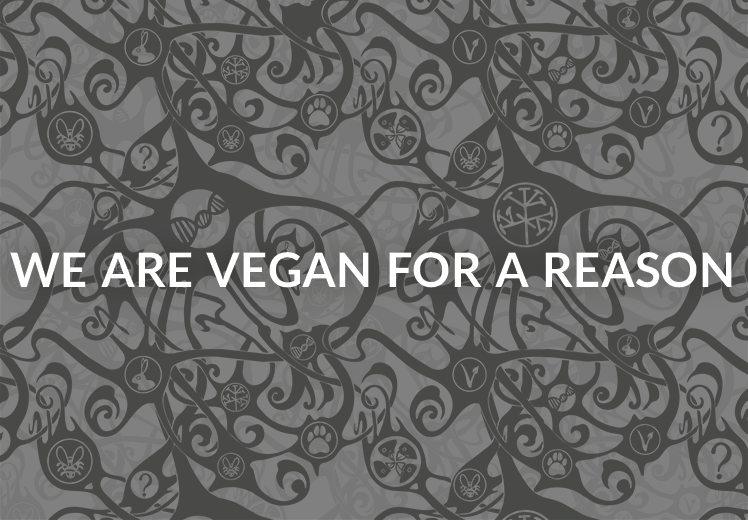 My skepticism and my veganism inform and support each other. I know many other reasonable vegans who feel the same way, so we made this the focus of our leaflet, congratulating the reader on their critical analysis of our culture’s attitude towards animals and urging them to continue this tradition of critical thinking onto other issues. Skeptics are often portrayed as arrogant spoilsports and so we thought it was important to convey why we think critical thinking is important: to protect ourselves and our community from harm, to nurture a basis of rationality from which to advocate veganism and to dispel the myth that all vegans are kooky irrational hippies. We also decided to sidestep the word science and skeptic hoping to avoid the perception of scientists as ‘boffins’* and skeptics as cynics. 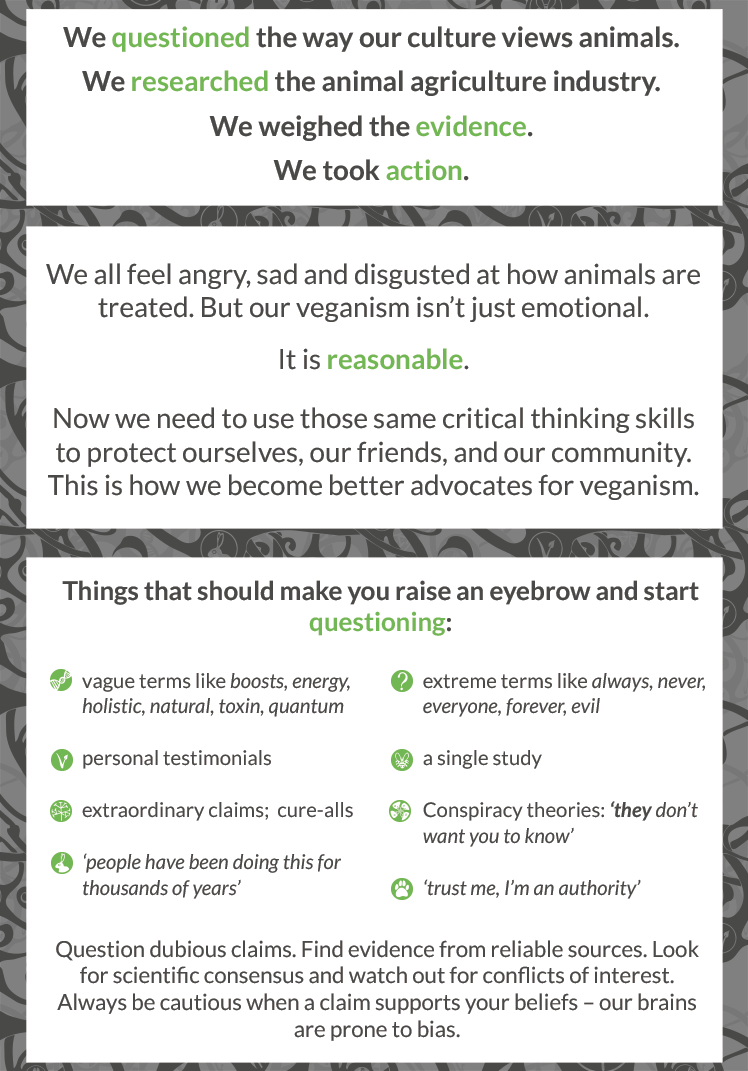 It took me a long time to find fellow reasonable vegans and we need each other to provide reliable information, support and to organise activism. I wanted other skeptically inclined vegans to have a base from which to start their own research into vegan topics so we designed an accompanying website that lists resources, provides links to skeptical vegan communities and suggests avenues for skeptical vegan activism. This site is intended to be an evolving list of useful links which we intend to continue adding to and curating. 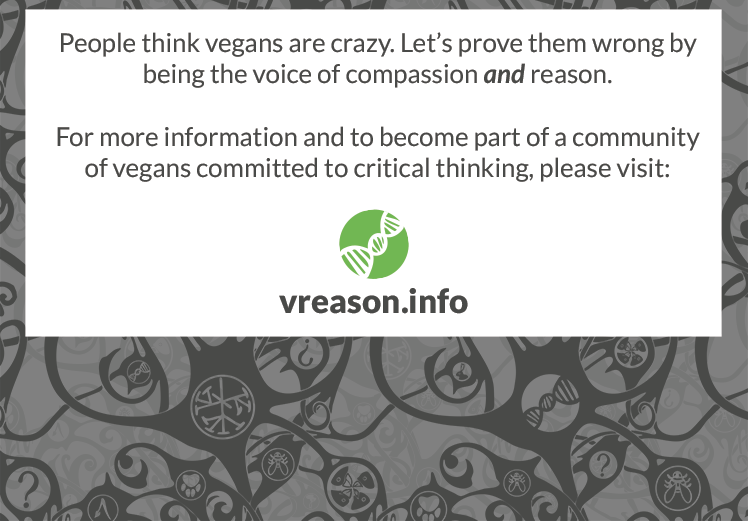 We took the leaflets to a vegan festival this weekend and handed them out in the queue outside the venue, hoping to prime the attendees to the potential dangerous pseudoscience they may be sold or lectured on while innocently enjoying their samples of delicious vegan food. People seemed friendly and receptive, but due to the nature of our fly-by leafleting strategy and the British tendency to avoid confrontation it is hard to know how many people engaged with the content of our leaflet.

Once inside I had a few interesting conversations with vegans who seemed cautiously enthusiastic about the idea of promoting critical thinking in the vegan community and I saw many attendees who probably do not identify as skeptics joining me in an eyeroll at some of the more ridiculous products and ideas on offer. I don’t know if it was due to the comforting presence of other reasonable vegans at the event or an actual decrease in levels of woo but I noticed less magical remedies and trinkets* than I have at other events. The main culprit in unscientific sales techniques were the purveyors of ‘natural’ ‘organic’ food and beauty items and anti-GMO scaremongering. This is not my area of expertise* however I did get into an interesting conversation with someone who eventually agreed with me that rice fortified with Vitamin A* thanks to genetic engineering was a net positive for the world since it can save the lives and eyesight of people with Vitamin A deficiencies in developing countries despite being ‘unnatural’ and ‘full of chemicals’.

Like the original Baloney leaflet we intend to make the Vegan for a Reason design available for people to print themselves and hand out wherever vegans may be in need of a little more critical thinking. We hope to make some small effort towards protecting the vegan community and perhaps more importantly empower other reasonable vegans to become part of a growing community of rational vegans who will be better advocates for animals. We would love to translate the leaflet into different languages and welcome suggestions or criticism of both the leaflet and the accompanying website. If you think this project is interesting or important we’d love to hear from you. The only way we are going to make changes in the vegan community is to work together. Come on guys, lets be reasonable.